A good weed whacker/eater or string trimmer is a very useful piece of equipment that every homeowner and landscaper should own. They are very convenient, easy-to-use, and can get to those hard-to-reach places. There are, however, different variations of weed whackers.

These have slightly different features to one another, so it’s important to know exactly what you need before you go out and spend your money. Let’s quickly discuss the different types of weed whackers.

The first type of weed whacker that we are going to talk about is the gas-powered weed whacker. This is the most common and preferred type of weed whacker, used by landscaping professionals and large property owners alike. They are powered by a combustion engine that takes either straight gas, or a mixture of gas and oil.

On a side note, there are different kinds of gas-powered weed eaters; 2 cycle/stroke or 4 cycle/stroke engines. The difference is that the 2 cycle weed eaters run on a mixture of fuel and oil, meaning you have to do some fuel mixing. Alternatively, the 4 stroke engine runs on straight gas (however, you will need to change oil separately). The other differences are that a 2 stroke engine weed whacker will be lighter in weight; however, a 4 stroke engine produces far less toxic emissions and pollutants.

The weed eaters that are electric (powered by an electricity cord) tend to be the cheapest on the market. The reason for this is that they are, generally speaking, the worst weed eaters. They are only just powerful enough to cut through grass and they require a power outlet and a never-ending extension cord. They are only good for small jobs around the house because they are quite lightweight and far quieter than gas-powered whackers. Another positive feature is that they produce no air pollution.

These are a great middle-ground between gas-powered and corded models because they have a little bit of everything. It doesn’t have quite as much power as the gas-powered ones, but it has slightly more power than the corded. Also, it’s lighter than a gas-powered model but heavier than corded models. The only downside to having a battery-powered model is that the batteries generally last from 30-60 minutes, meaning that spare batteries are always needed.

If you want to know which are the best weed whackers on the market please read our best weed wacker reviews guide. 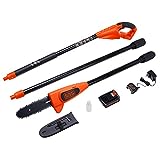